Cedar House: The Craft of An Alaskan Playwright

Recently I had the pleasure of working on a short play called Cedar House with Perseverance Theatre (PT- regionally renowned for some pretty great shows) here in Juneau.  If I haven't mentioned it, I have an MFA in set design with a secondary emphasis in lighting design and have worked on several shows with PT like Equus and Much Ado About Nothing.  This was my first foray into costume design though, and it was quite a whirlwind. 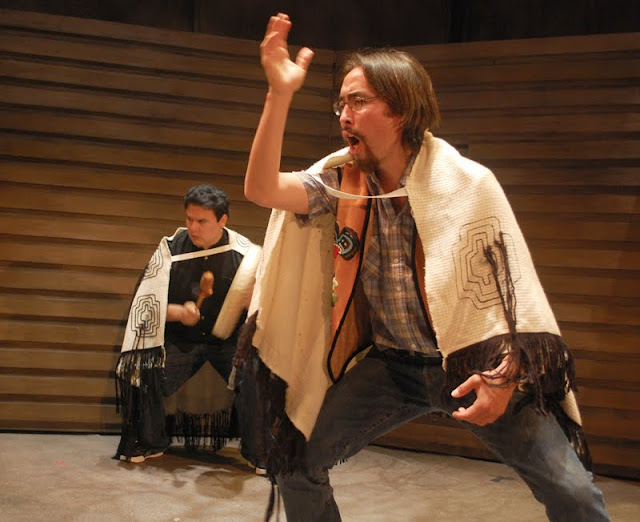 Ishmael Hope (front) and Frank Katasse (rear) perform in Cedar House.
We only had about three full weeks to get the show up and running, but I think we did pretty well!  Anyhow, for this week's Juneau Empire article I interviewed blogger, playwright (and performer/storyteller) Ishmael Hope about his writing process.  He is a Native Alaskan- Tlingit.  He is from the Raven moeity and his play tells several of his people's stories from a modern sensibility.  Check out his blog at alaskanativestoryteller.com and read on to hear directly from him . . .
The Craft of Creating a Play: Cedar House 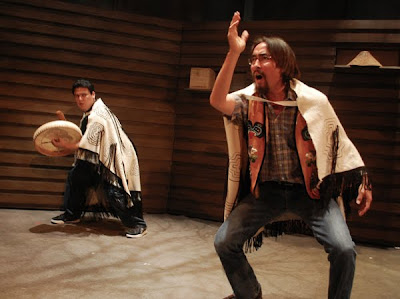 This summer, Perseverance Theatre tackles a new frontier and a new audience with its show "Cedar House." Geared specifically for an audience of tourists arriving daily into Juneau's capital city, the play brings history, culture and art to life for a quick 35 minutes on the mainstage.

Ishmael Hope both works as playwright and performer while he tells the stories of his people, the Tlingit, and their land, Lingít Aaní. As costume designer for the show, I watched the play develop and unfold. Intrigued by the process of the playwright, I sat down with Hope to learn about his craft, the craft of creating a play.

"All of it really ties into thinking, you know, thinking," he said. "I want to have company with people who take pleasure in thinking, and that's the kind of work I want to produce."
The slow, methodic words of an old soul filter out of Hope's mouth. Somewhat surprisingly he is a youthful 20-something who has written several plays for Perseverance and beyond, reflecting his Native Alaskan heritage.

Hope continues, "The most important for me has nothing to do with 'style' . . . it's really about being comfortable in your own human body, and thinking and allowing things to come to you. And then what you write hopefully has a sense of that."

Most of Hope's plays center around history and tradition, which he learns and passes on from his elders. In the same way, as a writer he says reading others' works is of utmost importance, followed shortly after by what he calls "getting out of your own head."

Quoting Gary Snyder he says, "'If you want to be a poet, spend two years having a manual labor job'."

The last step for him, and the first in the actual writing process, is going out and walking. His process literally involves a connection with the natural world.

"Just sit in front of a tree for an hour, and try to the think about what the experience of that tree is. Not what you think about the tree, but what the actual experience of the tree is, which is non-human. Let the nutrients of the non-human, and also of other people, let that come into you. That's the life-blood of writing. All good writing is circulated in around that area."

The actual writing of the story comes quickly for him after that connection with nature. The difficulty in the writing comes in the thinking beforehand.

"The big problem with being a person is that you can never really be sure what it's like to be someone else," he said. "Or what it's like to be a rock, or to be an animal or a mountain. So, you find great pleasure in thinking intensely on those things and then have it emitted out of your own person, out of your own thinking. And the words that come out of you retain some of that life that you've perceived."

The tangible moments that come out of a theatrical performance are when that life that is perceived is connected with all the other lives in a room can be electric. For Hope these connections are so important to share - as a Tlingit storyteller, as a performer, and as a father.


Originally published here at the Juneau Empire . . .
Posted by Alaska Crafter at 8:08 AM