The "On the Go Knit Kit" Tutorial- Part 1

I've been riding the bus lately (to save on gas and spend some relaxing time riding instead of driving). Well, often I want to knit a few stitches but feel uncomfortable with the length of my needles, and then the yarn decides to leap out of my bag and roll down the aisle. Oh, such a mess!

So, I decided to make the "On-the-Go-Knit-Kit". Below is Part One of the tutorial: Making the Needles. Hope this helps other bussers!

Making the Needles: My needles were too long so I decided to make my own. Here is how. 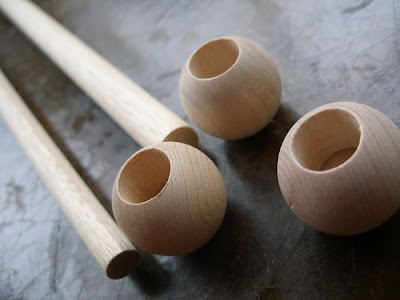 Start with some wooden dowels from your local craft store. I also found some wooden balls to cap the ends (not necessary if you want to make double-pointed needles). I chose a couple widths of dowel because they are cheap and I might want to switch. Lately I've been using some heavyweight yarn so I chose a larger dowel to start with. 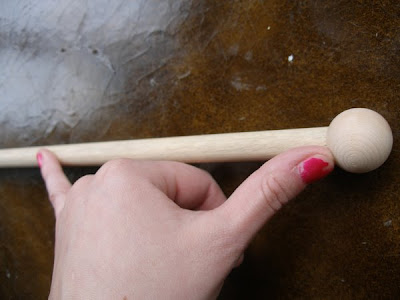 I attached the ball to one end and secured it with some wood glue. Okay, actually, I lied. I didn't use any glue because it just fit so snugly- but it could come off so I am telling you YOU should use glue. Yes. well. Then I very scientifically decided I didn't want the needle longer than my fingertips, because past that it would def. run into my bus neighbors. So, that is how I measured. 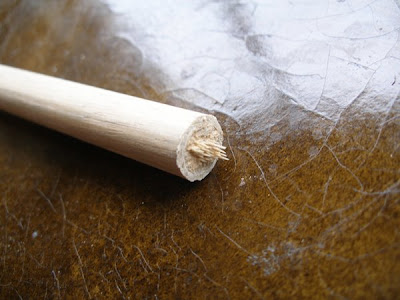 I cut it by rotating around with Cap'ns multi-tool. A small hack saw would be better, but I'm cheap. Oh, and then I just broke it when it got close. 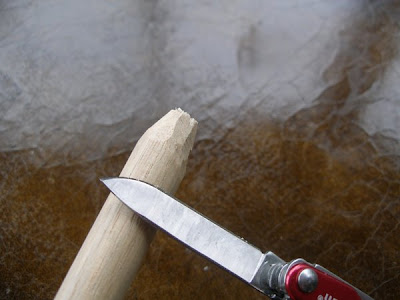 Then, I whittled it with my mini-multi tool. Oh yes, very cheap. 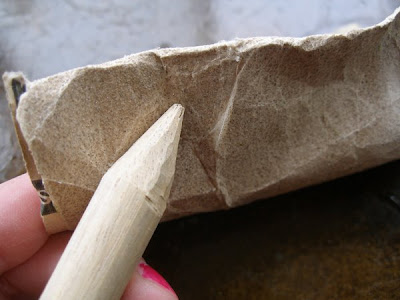 I got it whittled alright and then just used some sandpaper to make it nice and smooth for knitting. You don't want your yarn to get caught on a stray edge. 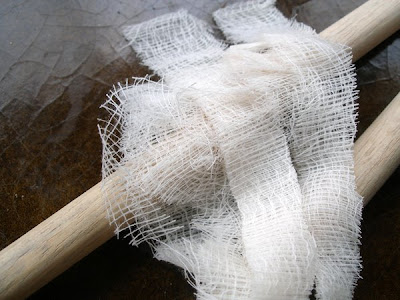 This stuff is really handy- tack cloth. It is basically cheesecloth covered in some sort of stickem. If you rub over the surface of your sanded needle it will make all the dust stick to the cloth and your surface will be prepped for painting. 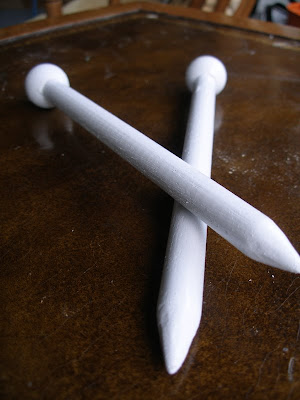 I then spray-painted the two needles I made with white glossy spray (I tried to use pink, but the bottle busted- harumph). Make sure it's glossy so you can easily slide the needles and nothing gets too sticky.

Okay, go make those and then get yourself a cup of tea and take a relax before Part 2 comes your way!
Posted by Alaska Crafter at 9:02 PM